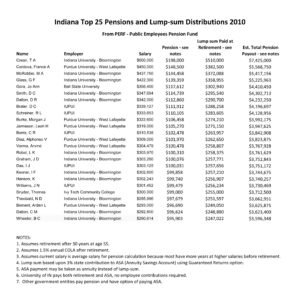 INDIANAPOLIS–A report released today by Taxpayers United of America (TUA) reveals that Indianapolis government employees are not only receiving generous salaries, but that over a normal lifetime, many of these government employees when they retire will become pension millionaires. Indiana bureaucrats refuse to release pension figures, so total pension payouts were estimated for this report. The bureaucrats of the city of Indianapolis and Marion County have refused to provide salary information, violating Indiana state law.

“While Marion County taxpayers struggle through this recession with an average wage of $51,000, a median home value of $122,000 and 9% unemployment, government employees really rake it in while they are employed and then when retired. Taxpayers not only foot the entire bill for the lush salaries but 100% of these government employee pensions are funded by the taxpayer.  In many cases, even the lump sum Annuity Savings Account is also completely funded by the taxpayers who will have to work until they drop to fund their neighbors’ retirement,” said Christina Tobin, TUA Vice President. “

“Starting first with the top 25 Pensions and Lump-sum Distributions (2010) for the entire state, heading the list is T. A. Crean of Indiana University, whose salary is $600,000. When he retires, he will receive an estimated annual pension of $198,000. In addition to his pension, he will receive either a lump-sum of $510,000 or an annuity. Crean’s estimated total pension payout over a normal lifetime is $7,425,000.”*

“Heading the list of Indianapolis government school Teachers’ Top 100 salaries (2010) and estimated pensions is Claudette Dyson, pulling in a generous wage of $107,359. When Dyson retires, she will receive a lump-sum payment of $91,255 as well as $1,452,565 in estimated total pension payments over a normal lifetime.”

“Indianapolis’ pension system is making millionaires out of public employees at taxpayer expense. Ending pensions for all new government hires would eventually eliminate unfunded government pensions; putting new government hires into social security and 401(k)s would achieve this. If each current government employee were required to contribute an additional 10% toward his or her pension, taxpayers would save billions of dollars.”

“We need to knock all politicians out of office who make deals with bad government union bosses and bad corporate power brokers at the expense of the taxpayers.”

*Assumes retirement at age 55 after 30 years.

Click here to view this news release as a PDF.