TUA’s commentary on Illinois’ corporate income tax was featured in an article by Dennis Byrne at Chicago Now. 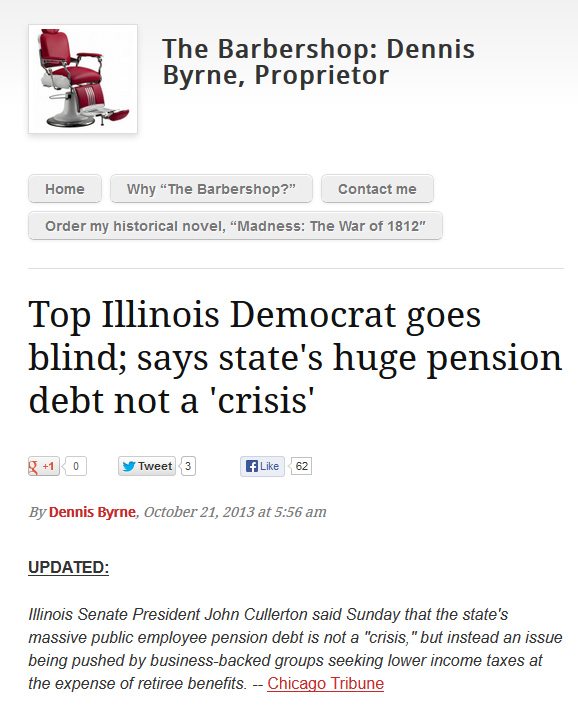 UPDATED: Illinois Senate President John Cullerton said Sunday that the state’s massive public employee pension debt is not a “crisis,” but instead an issue being pushed by business-backed groups seeking lower income taxes at the expense of retiree benefits. — Chicago Tribune

That’s the $100 billion owed by us taxpayers to the government employee pension funds. In truth, it would be a lot more than $100 billion if more realistic and professional actuarial standards were used to calculate the debt. (The bogus calculation assumes that the pension funds earn 8 percent interest.)

Never mind the 86,134 backlogged bills totalling $5.4 billion that the state also owes to its suppliers and service providers, many of them health care professionals that are essential for the well-being of poor people.

Never mind $71 billion in bonded indebtedness and that the state has the worst credit rating of the 50 states, meaning that borrowing the money to keep the state running keeps getting more and more expensive.

Never mind that the revenues from the Illinois income tax increase is being gobbled up by pension obligations, meaning less and less money for health care, law enforcement, education, transportation and other essential functions.

Cullerton’s assertion is a rare look into the empty noggins of the folks responsible for this mess, and signals a warning that state’s finances likely won’t be significantly improved. (We could well see a “window dressing” non-solution to create the fiction that the clueless Democrats who run the state are “doing something.”

UPDATE: Jim Tobin, of Taxpayers United of America, reminds us that the corporate income tax rate in Illinois is 9.5 percent, not the 7 percent that Cullerton states in the story. Tobin has noted that the figure seems to be misreported frequently by some in the media.

View As PDF By Dennis Constant The main reason why it is easy to sell war to peaceful peo[...]