Findings from TUA’s pension project are featured in the following article by Fox News Chicago. 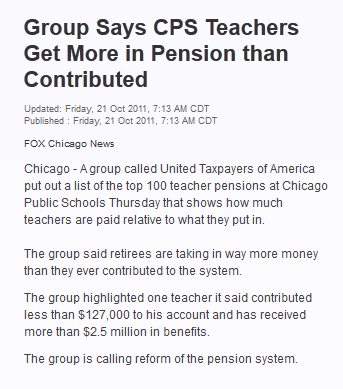 Chicago – A group called United Taxpayers of America put out a list of the top 100 teacher pensions at Chicago Public Schools Thursday that shows how much teachers are paid relative to what they put in.

The group said retirees are taking in way more money than they ever contributed to the system.

The group highlighted one teacher it said contributed less than $127,000 to his account and has received more than $2.5 million in benefits.

The group is calling reform of the pension system.

View As PDF By Dennis Constant The main reason why it is easy to sell war to peaceful peo[...]