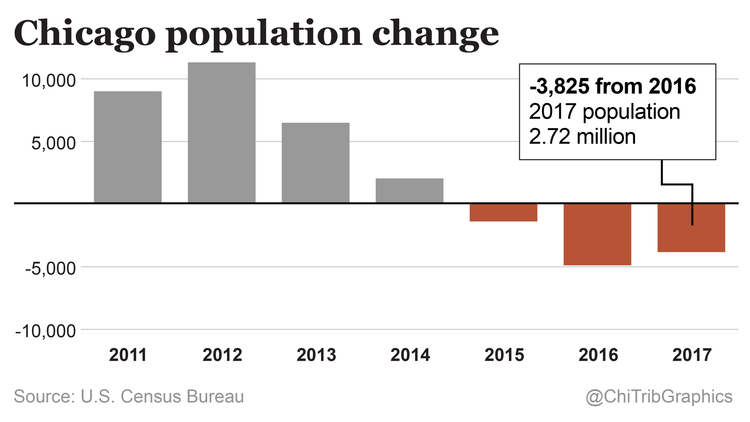 The article, Chicago population still tops Houston’s, described the population losses as a “trickle,” and added that “experts are trying to figure out why,” noted Jim Tobin, president of Taxpayers United of America, headquartered in Chicago.

“I can tell you why, and so can everyone other than the Tribune. Two reasons: the city’s and state’s high taxes, forcing taxpayers to flee to states with lower taxes, and the realization that the City of Chicago and State of Illinois are bankrupt and that both will go under in the not-too-distant future.”

“The lavish, gold-plated pensions of retired Chicago and state government-employees are rapidly drying-up their pension funds. Here are some facts regarding the Tribune’s host city.”

“All of the top 200 Chicago pensions for its ‘civil servants’ are at least $100,000 a year,” said Tobin. “The average retirement age for this group of pensioners is only 58. Social Security requires taxpayers to reach age 67 to be eligible for full retirement benefits, which average only about $17,000 a year.”

“I would like to inform the Tribune that the Municipal Employees’ Annuity and Benefit Fund of Chicago, (MEABF) is predicted to be insolvent in 8 years, according to its most recent audit. The auditing firm estimated that taxpayers would have to deposit $1,005,456,621 to make the fund solvent. MEABF does not include Chicago teachers, police, or firefighters who each have their own pension system, all separate from the 6 statewide pension funds.”

“The state of Illinois also is bankrupt. It can’t pay its bills because the outrageously rich government pensions have robbed  the taxpayers blind. And there won’t be a bailout by the state for the city of Chicago – there just isn’t enough taxpayer money, no matter how high taxes are raised.”